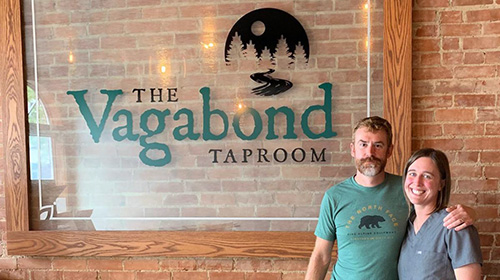 OAKLAND — Plans are in place for The Vagabond Taproom to open at 215 E. Alder St. in Oakland in early October.

Owners Pat and Michelle Hudnall said the specific idea for the theme of the bar came from a friend and hearkens to the era of the “Four Vagabonds” (Henry Ford, Thomas Edison, Harvey Firestone and John Burroughs) and their travels through this area.

“We wanted to take that concept and expand on it to represent our personal love of travel, exploration and the outdoors,” Pat Hudnall said.

Currently, the bar is running a “Pint for a Pint” initiative to expand on the concept of travel and exploration.

“We want people to bring us a pint glass with any destination logo and we will give them a token toward their first drink,” Pat Hudnall said.

The pint glasses will be included at The Vagabond Taproom for all to see and use. Since the bar isn’t open yet, Pat has partnered with Flipside Sounds, the Book Mark’et, The Cornish Cafe and CurlyRed/Craeve & Co. to be drop-off locations for the pint glasses.

He said the bar will offer 14 craft beers on tap, along with a rotating stock of two white wines and two red wines.

“With the beer, we will strive to be as regional as possible,” he said.

At the start, a small menu is planned with nine small plate appetizers ranging from chips and salsa to sliders and cornbread bowls with pulled pork.

Root beer will also be on tap and floats will be available, along with salted caramel bread pudding.

The décor will incorporate the story of the Four Vagabonds and include a painting of the group found in an antique shop as well as some photographs.

Several chemistry tables were purchased from a school in Ohio and displays will include books and a history of the Model T.

“We want to make it sort of uniquely Oakland, too,” Michelle Hudnall said. “We’re trying to do a lot of reclaimed things.”

These include tables from the Habitat Home Store and Englander’s, doors from a home that was torn down, fresh tin tile at the bar, maps and an original window from the building that includes the bar logo.

“We are trying to do things that are interesting and as local as possible,” Michelle Hudnall said.

She is a veterinarian at Pineview Veterinary Hospital in Oakland and the building where the taproom is located is owned by Dr. Rick Jenkins of Pineview.

Michelle Hudnall noted that it has been hard to find history on the building, but they do know that it was the Taxi Cab Inn in the early 1900s. At one point, it was a law office and there was a time when taxis were actually run from it.

Renovations have been made and the building currently includes a salon, two apartments and an empty storefront.

“We love many things about Garrett County ... the weather, the people, the slower way of life, the natural beauty,” Pat Hudnall said. “If we had to pick one that is our most favorite thing, it would probably have to be the access to so many fun outdoor activities. We truly live in a playground of fun things to do outdoors. In all of our travels, we have yet to visit a place that we think we would rather live, and we have seen some pretty cool places.”

Pat Hudnall noted that, as with many big life decisions, there is no straight-forward answer as to where the idea to start a bar came from.

“Since moving back to the area in 2008-2009, my wife, Michelle, and I had lamented the absence of a place to get a good beer, good food and hang out in the Garrett County area,” he said. “We had long been fans of craft beer and trying new things, and there just wasn’t anywhere around to do that.”

In 2017, while on vacation in western North Carolina, the couple found a newly opened taproom in a small town where they were staying called Refinery 13, with 13 different craft beers, ciders and/or wines from the surrounding area and had a very relaxing and friendly atmosphere.

“Refinery 13 was the exact model that we had wished was available in Garrett County,” Pat Hudnall said. “The model seemed simple enough and we started talking more seriously about the concept after that trip. Over the last two years, it has snowballed into this incredible project.”

The Hudnalls both grew up in Tucker County, W.Va., with ties to the Oakland community. They have been married for nearly 16 years, but have known each other since they went to elementary school together and have been very good friends since then. They live in Oakland and have two children: Ellie, 14, and Cameron, 9.

“We definitely want this to be kid-friendly,” Pat Hudnall said. “Our kids are going to be in and out of here and we want it to be a family-friendly atmosphere. It will be a fun place to hang out — beer and food will just be a part of it.”

“It started rolling from there,” he said.

He has an engineering history, but left his last job as a project engineer for the county in April to begin this venture.

“Our relationship with the other businesses in town has been great,” Pat Hudnall said. “Everyone is very supportive and excited for us to open. We have a strong belief that we should work together with the other small businesses to grow Oakland’s destination appeal. We plan to partner with as many as we can to help everyone succeed.”

To start, regular hours at The Vagabond Taproom will be 3-10 p.m. Tuesdays through Saturdays.

Staff writer Brenda Ruggiero can be reached at 301-501-8393 or by email at bruggiero@therepublicannews.com.